Occurring where it does in the Western cycle (Post-Peckinpah & Penn) & featuring a cast heavy with established character actors, The Lawman could easily be mistaken for Blazing Saddles as you're rummaging through cable, but it is, in fact, the last "real" Hollywood Western & its fucked-up death-knell.  If you can conceivably resist a cast that includes Burt Lancaster, Robert Ryan, Lee J. Cobb, Robert Duvall, Sheree North, Ralph Waite, John Hillerman, J. D. Cannon, Lou Frizzell, Richard Bull, Robert Emhardt, Albert Salmi, John McGiver, etc., you're a sturdier man than I. If you look up any of these names on IMDB, you'll recognize them instantly. But The Lawman plays out like a self-destruct device for the genre, complete with a High Noon-style clock embedded into the butt-end of a human skull. The skull clock sits on the Faro table/desk of the highly literate Old World dandy/saloon-keep (brilliant theater actor Joseph Wiseman) & it ticks off the hours while Cobb, his family & their ranch-hands decide whether or not to turn themselves in to Marshal Burt Lancaster after an old man is killed during the drunken tail-end of a cattle drive. The townsfolk, a staggering gallery of fine bit-players, are cowards to a man & the town's sheriff, Robert Ryan, is a bought-and-sold drunk who knows he can't possibly cross Lancaster in a gunfight. It's crucial that the Western iconography is so stacked & centralized here, because while The Lawman adheres to -- nay, amplifies -- every gesture of the genre, it has the same merciless drop-bottom as a scaffold. Because of the trappings, it takes a while to notice that the skull clock is counting down to a complete betrayal of the genre, with so many of its most innocent guest stars swept away in the storm. Watching all the townsfolk from Blazing Saddles look on while Burt Lancaster commits the ultimate Western transgression is as good or bad as it gets. Make way for the Anti-Western. While it was a little late in coming, it's good director Michael Winner threw the funeral. 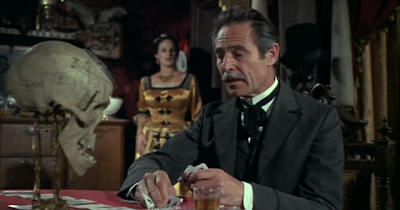 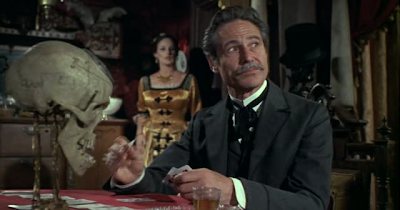 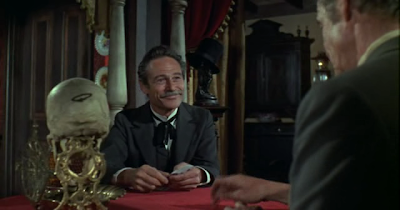 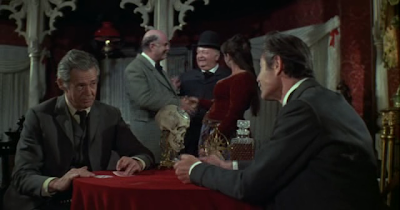 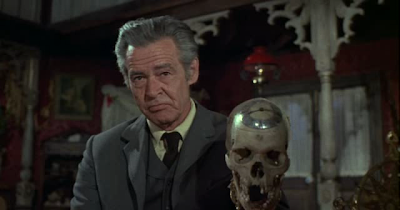 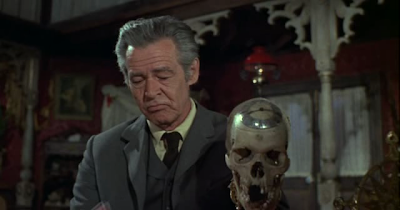 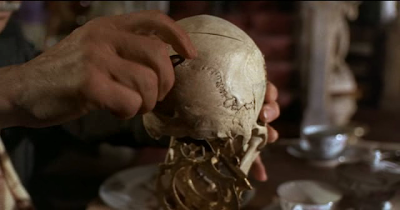 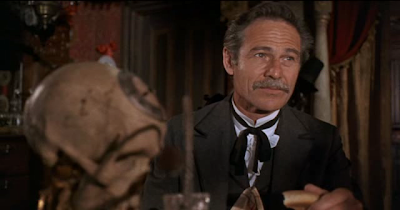 Just beneath Lubitsch in my infuriatingly adjustable pantheon of comedy directors is Mitchell Leisen & this sophisticated deco farce is one of his best. For those who insist that film progresses in sophistication as our society becomes more open-minded, I refer you to Lubitsch & Leisen, whose films, while beguiling in that eternally silvered manner of 1930s Hollywood, are never afraid to present love, friendship & lust as a heartbreaking melange forever confounding intentions, good or bad. They never judge the characters for supreme romantic confusion & they never resort to the cute expression on a dog's face or a fart when the complex situations finally overtake the punch lines. Of course, poverty is a fantasy state in screwball fare from the 30s (moments of Preston Sturges aside), but if you were living through the Great Depression, real poverty was probably something you didn't necessarily need to see when you'd spent your last nickel on a matinee.

I won't go into the blend of mix-ups & star-crossed dalliances that lead to this hilarious send-up of Coco Chanel, except to say they're well worth your time if you haven't, um, been. Elaine Barrie is fantastic as Simone/Chanel & she plays the queen of style with a pretty stone-faced authority, as a person who may be secretly bent on making her uppercrust clientele more grotesque than they already are. While she never entirely gives the game away, the shop decorations have the halved & quartered appearance of Dadaist objets d'art & if I'm not mistaken, that is one of Giorgio de Chirico's nightmare streets of the subconscious pretending to be an innocent wall mural. 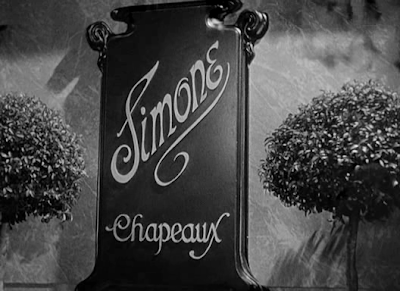 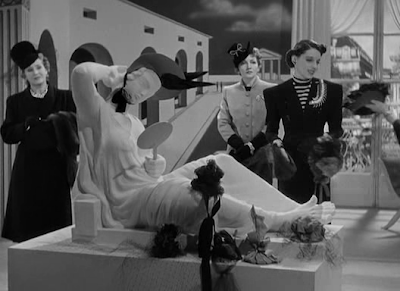 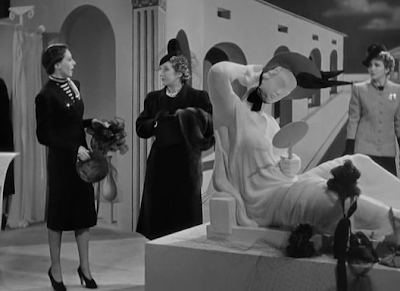 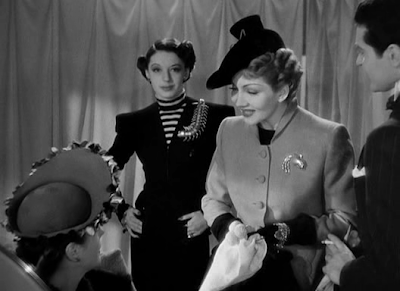 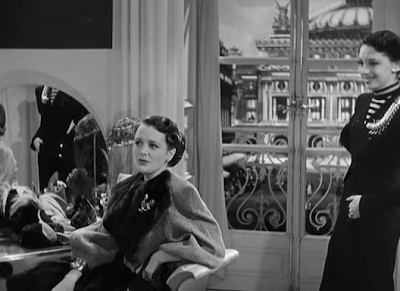 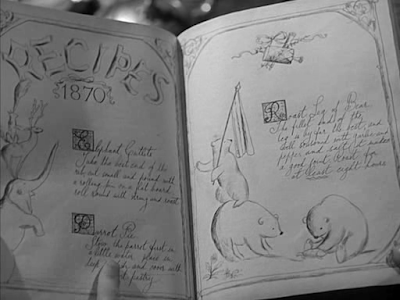 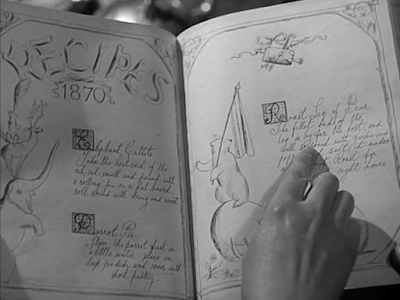 While chatting with the Nazis who've invaded her lovely little British hamlet in Alberto Cavalcanti's WWII film of encouragement, one sly, matronly village aristocrat offers up this amazing volume from the Paris Commune. While the Paris Commune of 1871 began as one of the world's great experiments in working class empowerment, it ended in anarchy, violence, starvation & well, the cooking of zoo animals. This book features recipes for elephant cutlets, parrot pie, roast leg of bear, antelope steak &amp; tiger casserole. The hostess/hostage explains to the Nazi how her grandmother, who gave her the grisly cookbook, got by during the ugliest days of  the Commune: "Horseflesh was unobtainable after the first few weeks. Rats were quite a delicacy apparently. I believe hyena was too much for her though. She was ill for weeks afterwards." 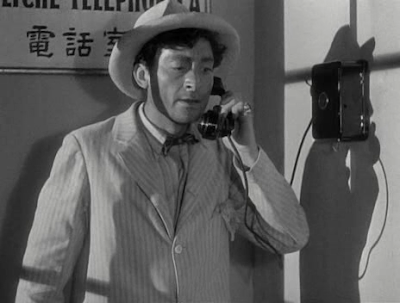 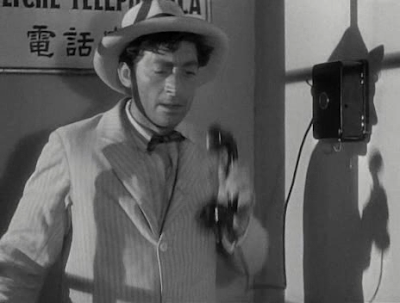 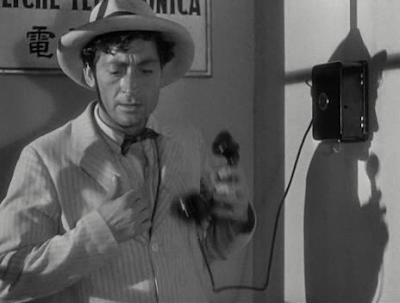 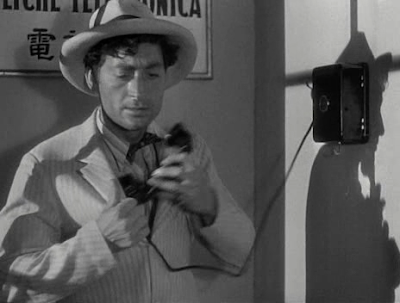 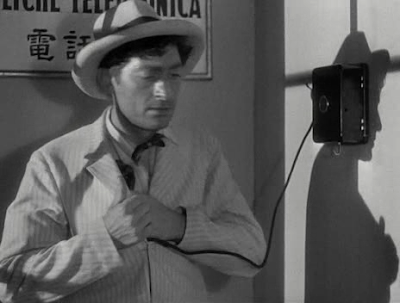 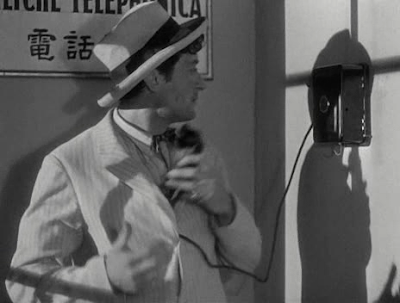 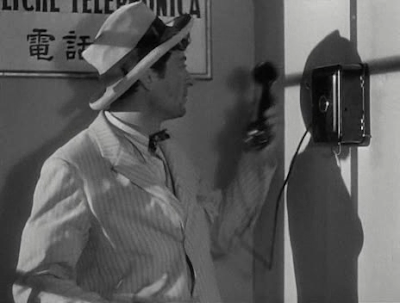 Once the incense & opium-clouded credits of this war-shattered film begin roiling over an elaborately conjoined series of  orientalist wooden panels, it's difficult not to feel a Von Sternberg film coming on, but instead we get a brilliant curio by the unfairly maligned French director, Jean Delannoy. While Gambling Hell is certainly in the Von Sternberg bailiwick, Delannoy is able to mix rollicking adventure with moody exotic misapprehension with a deft touch all his own. While the film is rendered with all the dark, smoky, amoral corners of an old world made sinister by shaky late-period European colonialism, Delannoy also choreographs an incredibly witty chase scene through a dusty bazaar, several top-notch shoot-outs & the kind of loopy derring-do one associates with Monogram serials. Strangely the film's tone -- veering as it does between languorous inscrutability, inevitable tragedy & Sailor Steve Costigan shenanigans -- doesn't inflict whiplash at all. Delannoy's film seems all of a piece & an elegantly crafted piece at that.

In Gambling Hell, Erich von Stroheim plays an arms dealer forced by warlords into an arms exchange he hasn't the cash to pull off.  Before sailing off to certain doom in Macao, he saves cabaret performer Mireille Balin (more on her later) from a firing squad & falls in love with her on the way to his personal Waterloo. Once in Macao, already dire matters become lethal as Von Stroheim grates against gangster/casino-owner Sessue Hayakawa. And that's enough of a sketch to get us where we're going in this post. The rat-fink/petty thief pictured above is the fine French actor Henri Guisol (Ophuls' Lola Montes, Renoir's Crime of Monsieur Lange) & as he's in the employ of anyone with fifty dollars, deco-ensconced Hayakawa seems to have fifty dollars more often than anyone else in Macao. Guisol enters the film declaring, "You are really lucky to meet me. As you can see, I'm a kind of lucky fetish. You touch the top of my spinal column three times & you win at every game. Twelve dollars for the artistic comments & fifty if you win." Guisol spends the film trying to hamstring Von Stroheim's arms dealer at the gangster's behest, though his job performance is less than exemplary.

While I've loved Gambling Hell for ages, I only recently latched on to this bit of business with the phone. Guisol, reporting the movements of Von Stroheim, Balin & a parade of other characters who become enmeshed in the film's modal brocade, forgets for the moment that the public phone is not the wallet of an easy touch fresh off the boat & attempts, out of pure animal reflex, to pocket the damn thing. Beautiful.

Of course, what's most-known about this wonderful little film is its backstory, which is so monstrously CAPITAL R REAL that it threatens to obscure Gambling Hell altogether. The movie was made in 1939, but, once the Nazis captured France, was re-shot with Vichy favorite Pierre Renoir taking over for Nazi bugbear Von Stroheim. The version featuring dickbag Pierre Renoir was released to uncomfortable Parisian silence in 1942. The leading lady, Mireille Balin, fell in love with an SS officer & was beaten, raped & incarcerated by the French resistance while trying to escape to Italy with her lover after the Liberation. Upon being released she was not allowed to work as an actress for a year as part of her "probation" & eventually succumbed to alcoholism. Once she was able to attempt a career again, she contracted a disfiguring disease & after an operation to repair her face failed, she went into hiding & died in 1968.

So, isn't it funny how he tries to steal that phone? Hilarious. 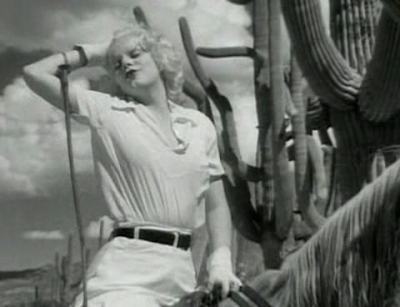 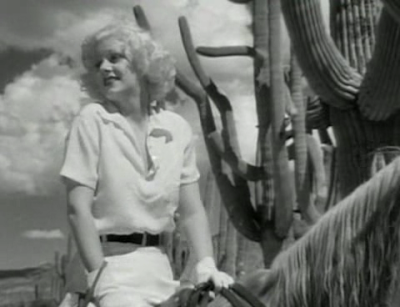 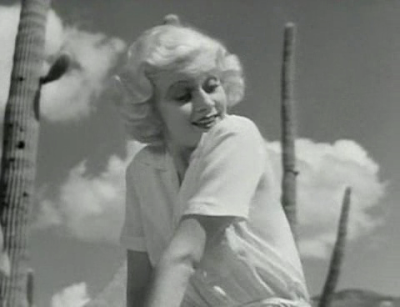 "Today & tonight will live forever in my heart. I'll lie awake all night on the pillow of its memory. I've known you in every ripple of moonlight I've ever seen, in every symphony I've ever heard, in every perfume I've ever smelt. Your hair, your hair is like a field of silver daisies. I'd like to run barefoot through your hair. Lola, my dearest, your mouth is like a gardenia opening in the sun...Poor, tired little flower! You're just an orchid that dropped & bloomed in a swamp. I'm going to take you away from all that sham & cheapness. I'm going to transplant you. We'll be married, dear heart & go together to Utopia. Around the universe. To the moon. I'll put the ring of Saturn on your finger. We'll sleep on Venus & the Milky Way shall be our coverlet."